I thought if I shared my journey I would be more likely to succeed.

When Things Don't Work Out as Planned 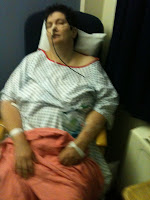 Back in my room everything seemed OK. I looked a bit worse than I expected, a few more tubes. My mum had died just 2 weeks before and I thought it would be bad for my daughter to see me like this so I asked the hospital to ring her, and tell her I was just very tired and not to visit me that first night.

The get you into a chair straight away so that you can move your legs, it helps with recovery. I had a morphine pump and in the past I have found these make me sick so didn't expect to be on it for long. In fact after an hour I was so 'spaced out' I asked to come off it.

Things were looking good until about 11 o'clock when I asked to go to the bathroom, after 4 steps I felt very faint and they put me into a wheelchair, next thing I know the room is full of people, alarms going off everywhere and people shouting at me.

I had passed out. Obviously it looked bad as they had pads on my chest and a crash cart out but I am sure they were just precautions. They gave me a few more drips and took lots of blood for emergency tests and after about an hour decided it was just a crash in my blood pressure which had dropped to 69 (I think 90 - 120  is good). They think it was caused by being very dehydrated and put it down to the delay in my op and me being Nil by Mouth for almost 24 hours. 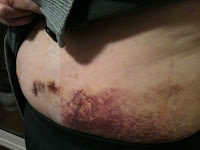 I spent a few hours under the care of the HDU (High Dependency Unit) and then Friday morning it was decided to move me to ITU (Intensive Treatment Unit) so they could do more tests, like take blood every hour or so and a CAT Scan (Computed tomography) to check for embolisms, all was OK, a lot of gas and blood in my abdomen but nothing too serious. My sugar levels were very high and I was still dehydrated so I stayed on the drips for a couple of days but eventually only 2 days late they gave me the all clear and said I could go home. I have to keep an eye on my Hemoglobin which was 78 but eventually climbed to 94 (and I have no idea what it means).

My actual op really was a success and I have about 12 stitches to be taken out next week and I have a lovely bruise. I feel very bloated but that is the gas still inside my stomach. I walk like an old man but walking well, and I have an ache in my back from lying down so long, but all that will be an old memory in a week or two.
So a bit longer in hospital than I intended, but I am out now and recuperating at a friend's house in the Channel Islands.