I thought if I shared my journey I would be more likely to succeed. 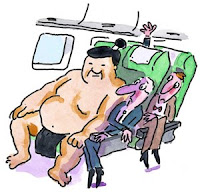 Today I caught the red eye out of Belfast and as ever it was packed. I was on the aisle, and two women boarded later to sit inside the row. The first lady was quite short but was as wide as she was tall. She tried to lift the arm rest on the aisle but that is fixed and she had great difficulty moving past it, as her height meant it was directly in line with her bottom. She was able to lift the two other arm rests but it took a good few minutes for her to huff and puff her way across.

She had a seatbelt extension and I have to say, when BMI had 1 1/2 seats in Business Class but a standard belt, I could only just use that. The lady was out of breath for a good 10 minutes.

I got off the plane quite quickly but was waiting for a friend at the back of the plane. There was a good 3-4 minute delay as this lady got herself out into the aisle and off the plane.

I don't think I would ever have got that big, my weight has its natural high, it is too high but hasn't changed in 20 years, but 'There but for the grace of God' did enter my mind.

Three more sleeps and then hopefully I am on my way to not being the person everyone dreads being sat next to on the flight.
at 01:52